Toronto and Vancouver subway wrong for taxpayers, riders and planet.

But I have a concern: You only have about $2 billion a year to spend on transit. Not much.

And the talk is that the money will go to “shovel ready” projects. That worries me, because it means you could spend all the money and more building a few kilometres of subway lines in Toronto and Vancouver each year. Not much benefit in a country this big!

Wow, I thought the Broadway line was expensive at $350 million per kilometre, almost three times the per-kilometre cost of the Canada Line. But the cost of the Scarborough extension of the Bloor subway line in Toronto will be pushing $475 million a kilometre!

And the extension will add just three stations. Only 20,000 people will live within a 10-minute walking distance of the new line, but research and transit authority experience makes clear that most pedestrians are unwilling to walk much further than 10 minutes to rapid transit stations, preferring to wait for a bus or opt for cars instead. That’s like a $180,000 transit subsidy to each of those folks. I bet they are wildly supportive!

The TTC — the Toronto Transit Commission — says another 9,500 people will ride the line, magically, during peak hours. That’s up from the disappointing maximum 1,900 passengers per peak hour who now board the Scarborough RT system — the SkyTrain inspired rapid transit line currently serving the same corridor.

If they are beyond walking distance, they will have to ride on a diesel-belching bus for the most uncomfortable part of their journey. Buses are cheap to buy, but on a long-term cost-per-mile basis they are a very bad deal for the taxpayer, and bad for the planet.

I am not sure how smart it is to spend all your money on a seven-kilometre hole in the ground serving three stations when for the same $3.6 billion you can buy about 100 kilometres of light rail system (generally less than $40 million per kilometre — see table of installed costs, researched by Kathryn Mandell, from around the world) using technology like the Combino tram(made by Siemens) or Flexity tram (made by Bombardier). 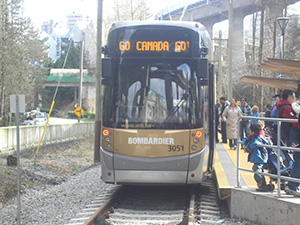 Bombardier Transportation operated a Flexity Outlook demo system in Vancouver from Jan. 21 to March 21, 2010, coinciding with the 2010 Winter Olympics.

I’m hoping that you see the problem here, Prime Minister. If we fail to use taxpayers’ money wisely, we will never get enough zero-GHG transit on our roads in time to meet those 2050 emission reduction targets you just signed on for in Paris.

Now that you and 190 other countries have signed a pledge to save the planet, we really need an entirely new way of thinking about transit.

Building for a long gone world

But things have changed again. For starters, downtowns have steadily lost their dominance as job centres. In the Metro Vancouver region, downtown Vancouver and the Broadway Corridor account for less than 20 per cent of all the region’s jobs, and as the region grows east that proportion will likely continue to shrink.

And in the 1960s, most families had one car that was used for the commute to work. Those commutes constituted the lion’s share of all trips, and they tended to be long.

But now most car trips are in the neighbourhood, to soccer practice, or to drop kids off at school or pick up milk. A transit system designed around the steadily diminishing (proportionally) long trip to work is a transit system built for a long dead world, and it will not change driving habits fast enough to save us.

What we need now is a system that gives due respect to these more local trips, and aligns a land use and transportation plan around this new reality.

Sadly, both Vancouver Mayor Gregor Robertson and Toronto Mayor John Tory are stuck in the past, in slightly different ways.

This is the oddest part of the deal, don’t you think Mr. Trudeau?

The Scarborough RT system, built in the same year and with the same technology as Vancouver’s Expo Line, could have been upgraded for only $500 million. Yet Toronto city council voted to scrap the SkyTrain-type system entirely, deciding that after spending hundreds of millions of dollars to build it that it was “at the end of its life.”

Meanwhile, Vancouver is extending the same apparently antiquated system halfway up Broadway at a cost of $2 billion. Hmmm. What gives? Who made the right choice?

I think they both missed the boat. I think the challenge is to take the smallest amount of taxpayer money we can and get the most GHG-friendly transit possible in the shortest amount of time. We need a nationwide project to convert the entire transit system to GHG zero electric power as quickly as possible, in a way that offers the maximum number of people transit within walking distance of their homes.

Prime Minister, if you allow Vancouver and Toronto to dump most of the available money into two very short holes in the ground, we can forget it.

Our numbers suggest that in areas with sufficient existing ridership, the installation of European-style tram systems is your most cost-efficient solution. Many disagree and claim that rapid trolley bus is the cheapest and fastest way to this goal. Our numbers say otherwise, but let’s do both.

The challenge is to save the planet. We have very little time, and very little money available to get the job done. Continuing our mad trend of spending more and more on less and less is a definite recipe for failure.

It’s not too late to shift direction. You can call it “real change.” Catchy slogan.

Professor Patrick M. Condon is the chair of the Master of Urban Design program, UBC School of Architecture and Landscape Architecture.